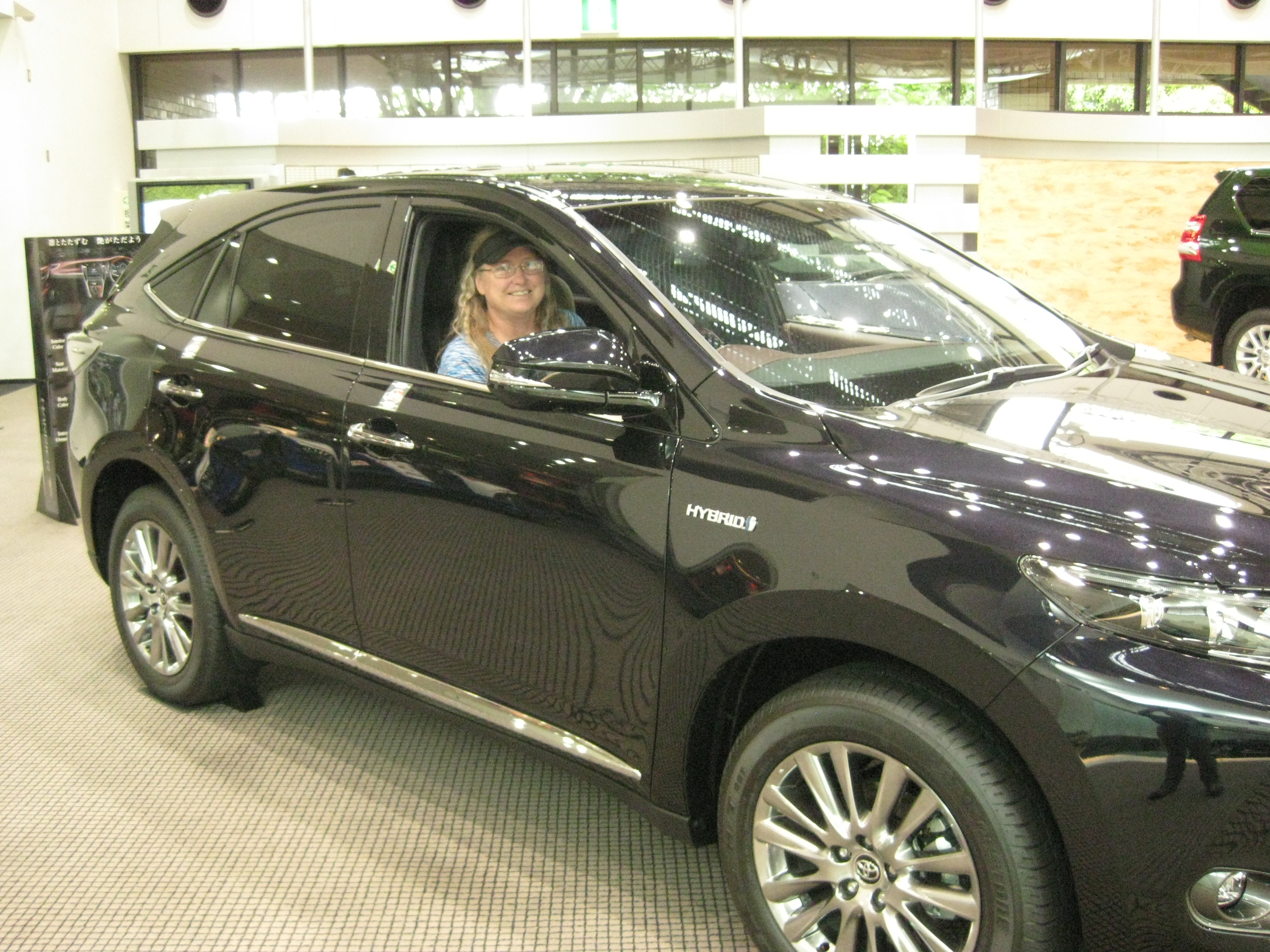 Visiting the Toyota Factory Tour and museum was a highlight of the trip. It provide a great insight into Japanese corporate businesses and the Toyota Production System.

On our way to Toyota

“Squawk! Squawk! Squawk!” At 4:30 am we were rudely awakened by a cat sized crow that was a little to anxious to greet his neighbor. We tried moving and shaking the Nube to scare it away, but that bird wasn’t going anywhere. Just giggling, we rolled over trying to ignore the ruckus and fall back asleep.

At the proper awakening time of 8:30 am, we finally rolled out of our hammocks from an amazing sleep! The Nube was dry from the hot, early morning sun. Even at this early hour, we were scavenging for shade as we packed. Boy, oh boy could we feel that heave wave they had been describing on television.

All packed, we were off to Toyota! 🙂 It was only a week or so after we had wanted to go on the tour, but I was very happy that I made the reservation from the “very” expensive Onsen (hotel) in Katahara. I showed the email to the receptionist at the Toyota Kaikan museum. She looked very confused as she could find “Ash & Val” (accidentally typed mom’s name wrong on my 6th time typing in the reservation because the wi-fi kept timing out). After looking more closely at the email, I noticed that it said “2014-06-03”. Oops! It was made for the 3rd of June….. Very nicely, the receptionist asked us to wait. She talked on her phone for a little while, then informed us that we could join the English tour that was headed out shortly!! We were very happy!

The last name of the founder of Toyota is actually Toyoda. He changed the one letter because the “t” sounds more crisp, in Japanese writing it’s 8 strokes instead of 10 (8 is lucky), and to clarify that the family is separate from the “society owned/based corporation”. Female workers are provided with 2-3 years maternity leave. The Maikan facility that we toured is larger than 39 baseball fields. Just some of the facts from the tour that I remembered.

During the tour of the Kaikan museum, I was able to drive a simulator that illustrated how their new safety technology worked. I managed to go 1,258 km, which was almost a record, but only earned a “C’ for safe driving!! Uhh, only a “C”?!? The rest of the museum was also interesting; we enjoyed watching the videos while standing directly under the AC vents because it was quite hot. During the tour, they had a hands on section where Val and I raced against each other. She always won, but was incredibly fun!

Back at the end of the museum, Val found the car that contained a really amazing massage chair that also reclined. She loved that car. We also found the mouth gargle station that was installed bathroom, and that the infant/mother room had privacy curtains, a milk warmer, and they could even control lighting and AC! Wow were those bathrooms fancy! We also found a very entertaining optical illusion library art piece. Val made me film the piece, plus I also got a video of her trying the gargle station. That foam stuff was yummy!

After the tour, we got back on the Shinkansen to Osaka to see the Tempozan Ferris Wheel at sunset, and be in the right place to see the instant ramen museum the next day. After the museum, we are off to Mount Koya Temple, and finally to the start of the National Geographic hike, which we will start on the 9th. Our Japan Rail pass runs out at midnight on the 8th, and we are planning to start our 2nd pass on the 12th, which is when we are planning to finish the hike. That way, we will have the rail pass active through the rest of the trip!

I also took photos of the rice fields, mountains, and clouds just east of Maibara from the Shinkansen. We made it to the Tempozan Ferris Wheel just as the sun was setting by taking the Osaka loop train, then switching to the universal city line and riding it all the way to Sakurajima. We then walked by the staff entrance to Universal Studios Japan and a 7-Eleven, where we stopped to by dinner on the way to the Tempozan Ferry, which ended up being free! Eating our pasta and ice cream parfait at the base of the largest Ferris wheel was fun since we could watch the lights change on the Ferris wheel and on the nearby water fountain. While we were riding the Ferris wheel we didn’t get a chance to see a whole lot as we spent the time taking fantastic photos with the Osaka skyline in the background. Riding the Ferris Wheel was only 800 yen per person, and you could even wait for one of the transparent gondolas if you wanted!