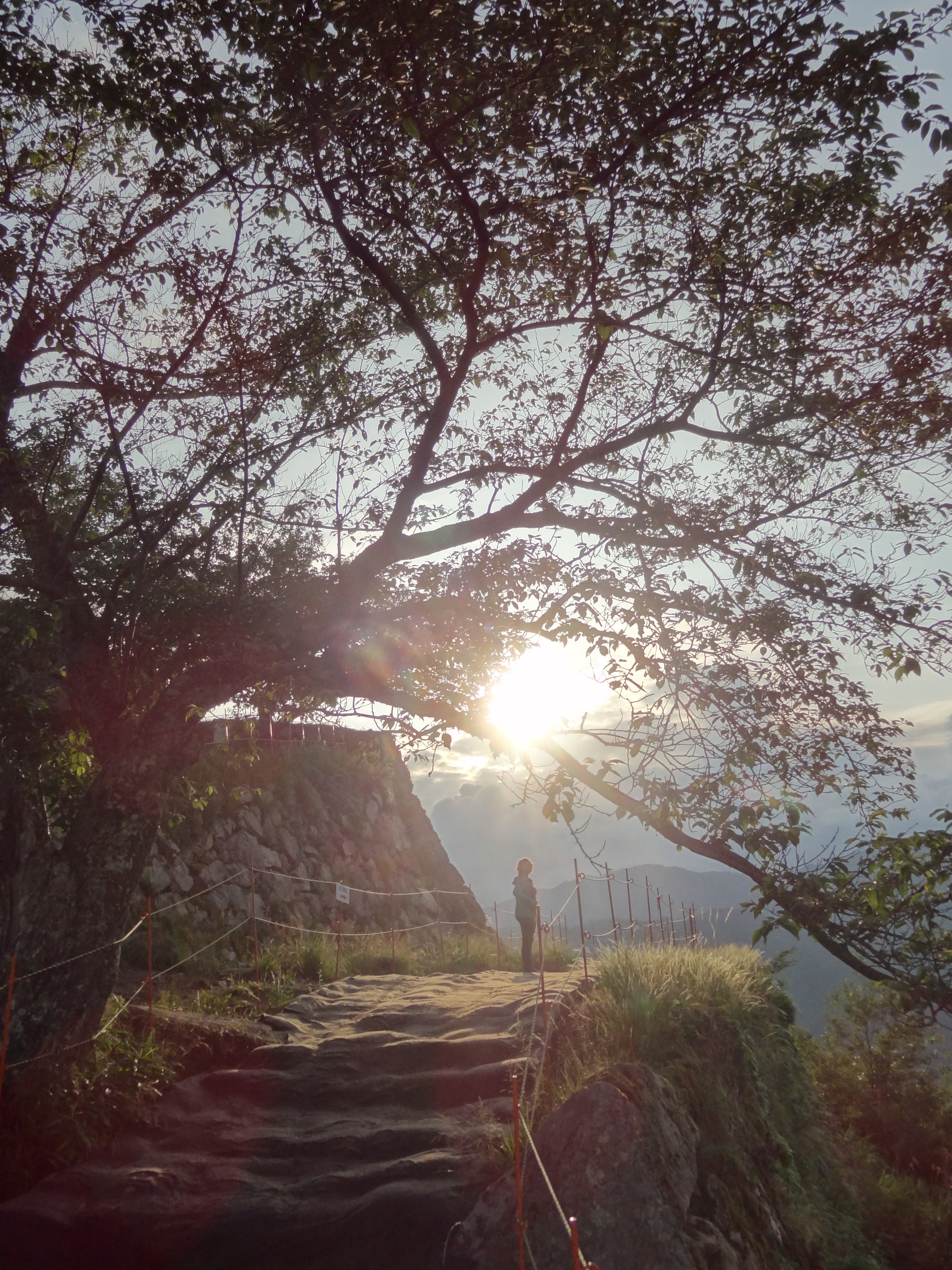 Visiting the Taked-jo Castle in the Sky was high on my priority list as huge fan of anime, but while in Osaka we had to visit the Cup Noodle Museum.

Tempozan Park is very busy, no matter what time it is. There were drunk people loudly walking around at 2 am, and even at 6 am there was an exercise group.  Complaining seems a little outrageous, however, when your accommodations are free. 🙂 For sleeping in the outskirts of Osaka while having bathrooms and being close to the Ferris wheel it was great, even if we didn’t wake all that rested.

We quickly packed up so that we were not in anyone’s way while they were trying to enjoy their early morning exercise class in the park. Then, we were off to see the Cup Noodle Museum. We took the ferry back to Sakurajima, mailed Val’s letters, picked up breakfast at the 7-Eleven, and headed to the train station to catch a ride back to Shin-Osaka. Val wasn’t feeling all that great, so she only picked out a 1L carton of orange juice for breakfast.

Subway to Hortadake, then a monorail to somewhere else, and finally a train to Ikeda. From there, it was only a 5 minute walk to the Cup Noodle Museum! The museum itself was free. You could pay 300 yen to decorate and create your own cup of noodles, which of course we did. Val drew our hammocks hanging off trees and a sunset. I drew bamboo, Val and myself under an umbrella with our packs as it rained. The workers really liked our drawings it seemed. We decided to eat the noodles for dinner so we weren’t carrying them around in our backpacks for the next month.

Walking to and from the Museum we had found this cute little bakery that looked like it was right out of a cartoon and we had to stop and check it out. Initially we were on a mission, to visit the Cup Noodle Museum, but having taken care of that, we stopped and purchase two little deserts! Hey, it wasn’t ice cream, so that was an improvement….nah, just a little change of pace 🙂 I ended up with a delicious little orange pudding with some time of cream on top. Val purchased a cake with some very tasty fruit. We both enjoyed our treats on the Shinkansen to the Takeda Castle.

Castle in the Sky

After taking a photo with a statue of the founder and our cups of noodles, we were off to the Takeda Castle ruins, but first we needed to take the train all the way to Umeda-Osaka station to catch the bullet, and then a limited express. It took some communication with the Shin-Osaka staff to figure out the trains we should take to get to the ruins, but the staff there finally figured it out and told us to take the Shinkansen to Himeji, then the express to Takeda-jo. If you ever have a chance to make the same trip, be ready to switch trains at Tamara, since the electric train is too tall for the tunnels, you have to switch to a diesel run train. That switch is like a mad dash for the bench seats, otherwise you’re standing for the next 30 minutes or more.

Arriving in Takeda a little before 5 pm, we caught the last shuttle bus up to the highest drop off point. The staff who work in the information center that is located in a refurbished distillery hurriedly ushered us out with a very poor map of the area…but we were off to the “Castle in the Sky”. The bus driver was very kind by telling us to stay on the bus to get a ride further up the mountain so we didn’t have to walk as far. The castle ruins are 800 meters from the start of the trail, which is about 200 meters from where the bus drops you off. No matter where you ride to on the loop, its 160 yen, but the buses make a complete loop, so be careful. There are bathrooms at the souvenir shop, and at the beginning and end of the trail, and also at the rail station. The ruins have become very touristy, so they have roped sections off and covered all of the original rocks with sand bags and fabric tarps to protect them from the hordes that would be walking on them. The best time to see the ruins is later in the evening on the last bus up as you will have much of the castle all to yourself.

We were very tired and cranky by the time we finally made it up those 800 meters to the castle. We watched the sun as it started to set and took plenty of pictures of the castle and each other. Then, it was way past time to find a place to set up the hammocks. We ended up down at the souvenir shop in a pagoda. Mom had to make the decisions as I was mentally shutting down. With the Nube and hammocks set up, we boiled some water for our Cup Noodle, then we climbed into Val’s hammock to get away from the bugs and eat dinner. After organizing the cooking pot and trash, we went straight to sleep!