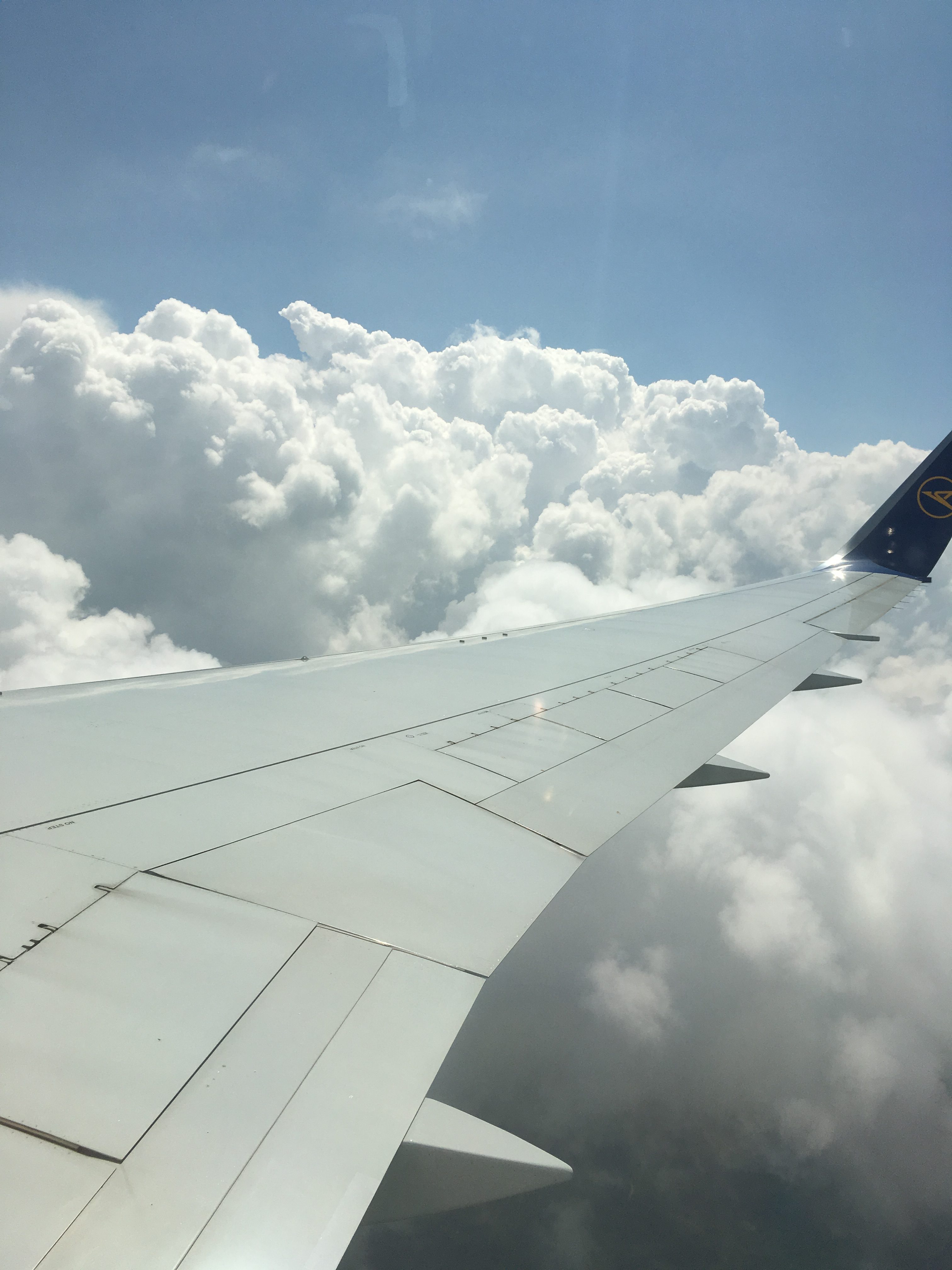 When we first started looking into a trip, Europe and Paris weren’t actually at the top of our list. Our trip planning has been based on finding a cheap ticket to Europe via Google Flights. Luckily, we happened upon a deal for about $900 round trip to Paris, when every other destination was well over $1k. We discovered that Condor Air was the reason for the discounted flight. There are tons of reviews on Condor Air online, so I won’t spend much time on things except to say that my credit card wasn’t charged until the week of the flight, and the flight itself, while uneventful, was cramped and crowded as only a discount airline can be.

Leaving Seattle was easy enough. We availed ourselves of the fantastic public transit system, and took a bus directly to the airport, then proceeded to check in and go through TSA screening. Unfortunately, Josh’s TSA Pre-Screened status didn’t offer any help as most international airlines are not involved in the program. The flight was direct to Frankfurt, so only 10 hours, but with an 9 hour time change it was a little painful to adjust. Given the discount nature of the airline, there wasn’t a lot of room on the plane for sleeping even if we did have the entire 2-seat row on the outside of the plane to ourselves. So, we spent our time reading, watching a movie, trying to doze and eating the discount airline meals. When we arrived at Frankfurt, it was time to find some “real” food and catch our transfer to Paris on Lufthansa.

Once in the sprawling Frankfurt airport, we ended up walking nearly two miles (not because we wanted the exercise, but because Frankfurt Airport is just that huge!). We finally found some food and our new gate for the connecting flight to Paris. Lufthansa provided some much appreciated coffee in the waiting room, so we had some caffeine before boarding for Paris. Unfortunately, as soon as we boarded…our flight was delayed, first due to a thunderstorm in Paris, then a thunderstorm in Frankfurt! Luckily, Lufthansa provided us with very comfortable seats compared to Condor Air, and we stretched out and fell asleep. I felt a little sorry for the other passenger in our row as we were likely snoring most of the time! Those zzz’s were what helped power us through the rest of the evening in Paris.

Our final approach to the city of love and lights (and fashion and great art and architecture) was a little dulled by the 16+ hours in transit, but with full stomachs, a shower and a solid night’s sleep, I’m sure we will soon be ready to take on the day!

Making our way through the winding maze of Charles de Gaulle airport was a little frustrating. We zigged and zagged our way to the baggage claim and finally found the correct train to deposit us near our hotel. If you’re wondering, the RER B is the main transit from the airport into the heart of Paris, and only cost us 6 euro apiece! Getting the tickets was a trial of patience as we kept trying to get the machine to accept our chipped credit card. Unfortunately, what it needed was the one thing we lacked…patience. Apparently, waiting for 3.245872 minutes is the correct amount of time to process a US credit card before handing over train tickets.

The 45 minute trip into Paris was uneventful and, quite frankly, a little boring. There wasn’t much to see except train yards, warehouses and graffiti all along the route. No new and exciting sights greeted us. Having very few pre-conceptions about Paris other than the typical movie scenes, it was almost hilarious to realize that I had thought there would be some fabulous unveiling; such as the train going under the Eiffel Tower or through the Arch of the Triumph. That little realization is laugh worthy thinking back on it; no such event occurred, and to a certain extent, I am happy for it.

Finally getting off the train just south of the center of Paris, we only had to walk a half mile to our hotel! We could have caught another train to a metro stop a little closer, but it was more fun to see what Paris had to offer and scout out a nice place for dinner! Settling into our hotel, we opened the windows to cool the room off, grabbed the necessary items for dinner (cash, credit cards, a jacket) and wandered out onto “Goblin Boulevard” to find some dinner. We didn’t have to wander far before we found a lovely little restaurant serving Italian food, so we stopped there and had some pasta and a calzone.

With our bellies full and our bodies clean, we finally fell asleep around midnight to the sounds of Paris.