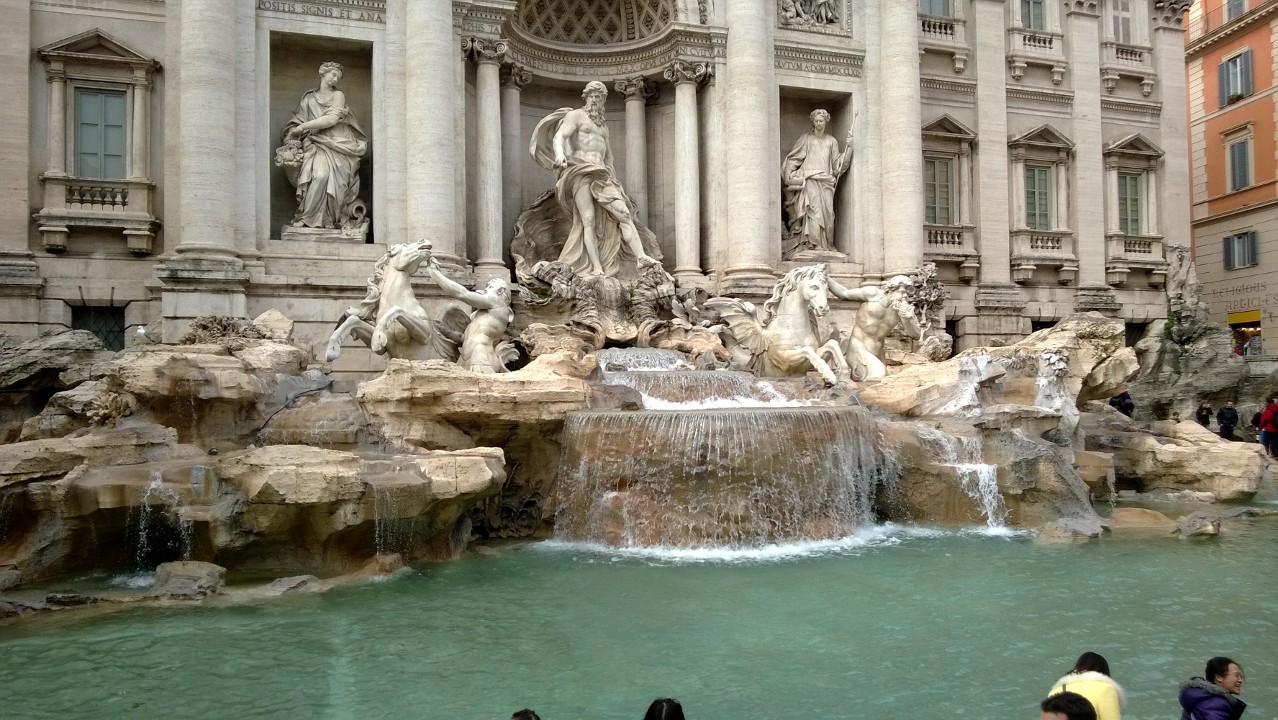 Rome, or Roma as you see on signs everywhere as you are walking around…is a gorgeous city. It is incredibly easy to get lost in the architecture, the history and the romance of it. There is nothing quite like seeing the history in person. In fact, no matter how much planning you do, you will inevitably find yourself accidentally bumping into bits of history that you hadn’t planned to, distracting you from your goals, and causing all sorts of delightful delays in whatever plan you established before you set out to experience Rome. I, for one, absolutely enjoyed being taken in by all of the random little tidbits of history that just happened along at odd times. Here is a link to the summary of this Italian experience, Rome in a Day.

I was in England for work for three weeks, and on a whim, decided to spend a weekend in Rome. I flew out of London on a Friday morning, and came back on a Sunday afternoon. In reality, I only had one full day and a few hours on Friday evening and Sunday morning with which to enjoy my time in the city, and enjoy those days I did!

I flew in on a foggy and rainy day, and there wasn’t much of a chance to see the city from the air before landing.

What we did see was a lot of rain and fog, and a city that doesn’t really have any skyscrapers. Definitely charming! You’ll see in some later pics that the Tiber was incredibly full, and I was very lucky that Saturday was sunny. Our first stop was the Hotel Napoleon, a little boutique hotel on the Piazza Vittorio Emanuele II. A “Piazza” is basically a square or a marketplace in Italy, and they are everywhere in Rome. Most of them have amazing fountains, great architecture and probably some historical significance. After all, Rome has been around for nearly 3,000 years. I wasn’t expecting much from the hotel because it was very inexpensive, but I was exceedingly surprised by so much of the decor. The floors were marble throughout the hotel, and the paintings were very good.

On the first night, it was still pouring down rain, so I grabbed one of the umbrellas at the front desk before heading out. I walked over to the Piazza di Santa Maria Maggiore, and wandered into the first cathedral I found, Basilica Papale di Santa Maria Maggiore. It was an incredible sight! My first Roman cathedral. It was pretty much the most luxurious church I had ever seen up to that point. (Little was I to know that Rome is covered in luxurious cathedrals…)

After looking through the cathedral, there was still an hour of daylight left, so I took off for the Colosseum and poked around it for a little while before it started to rain quite hard. The tours were closed by then, so I just explored around the outside and walked back to the hotel for dinner.

Saturday was the big day! I had drawn a little map of where I wanted to go. Here’s where the beauty of wandering through Rome becomes apparent. The original plan was to see the Piazza del Popolo, the Trevi Fountain, Palazzo Montecitorio and tour the Colosseum before the end of the day. Since I was walking, I figured five miles would be enough before I was exhausted. Little did I know that the actual trip would end up taking me much further afield. Here are two maps. One shows the original plan, the 2nd shows what actually happened!

The original plan died in the first hour. Remember, this trip was “planned” on a Wednesday and executed two days later while working 15 hour days, so really all I was equipped with was a plane ticket and Google Maps. On my way to the Piazza del Popolo, I accidentally ran into the Spanish Steps and walked down them. So, first itinerary change of the day.  I don’t know how I could forget about the Spanish Steps, but there were a thousand pieces of history within walking distance of my hotel, I was bound to luck into a few of them!

After a quick walk down, up and back down the Steps, I forged on to the Piazza del Popolo. (I must mention that while on the steps, I saw in the distance a building with some golden horses on the roof, and wondered if I would end up near this building.) This was apparently the original gate into the city of Rome from the north, and all of the largest homecoming gatherings happened in this square. On the south end of the square, it splits off into three streets that are called “the Trident”. These streets are split up by two churches, Santa Maria dei Miracoli and Santa Maria in Montesanto.

Eager to move on with my day, I left down the rightmost street in the Trident, Via di Ripetta on my way to the Trevi Fountain. Unfortunately, before I got to the Fountain, my epic detour began. First, I saw the Tiber River, so I walked over to see it! On the way, I snapped a quick picture of the Mausoleo di Augusto and Chiesa di San Rocco. As you can see, the river was extremely high due to the extreme amount of rain. I was told that this was the first sunny day in a week!

While looking around the Palace of Justice, I saw a huge fort just in the distance, and being an admirer of architecture in general and forts in particular, I continued my detour. Castel Sant’Angelo and the St. Angelo Bridge were both incredible to see!

This brought me ever closer to the Vatican, so my detour continued as I walked over to Vatican City to send a post card and look at the Piazza there. I wanted to go inside for a tour, but after speaking with a few people, they said it’s a tour that can easily take an entire day or more to see everything and I was already very far off course for the things that I had already planned to see! So, Vatican tours are on my list for when I return!

After a quick lunch at a nice restaurant on Via della Conciliazione, I went back across the Tiber towards the Trevi Fountain, my original destination. After consulting the maps, I decided to wander the alleyways to Piazza Navona. The Piazza looked like it would have a great fountain, plus it was larger than most of the other Piazza’s in Rome, so I figured it would be worth a look. It was!

I left the Piazza heading east by a small side alleyway, intending to take the shortest route to the Trevi Fountain. Fortunately for me, my “shortest route” ran me smack into the Pantheon, which I hadn’t even considered visiting. Boy am I glad that I did! I believe that it was the highlight of my day to see that gorgeous building. It doesn’t look like much on the outside, but once I got inside….I was blown away by the sculptures and the view.

Upon leaving the Pantheon, I finally got straightened out and went directly to the Trevi Fountain. This had been my original goal about five hours before, and it did not disappoint in the slightest. The Trevi Fountain shows incredible workmanship. I’m not sure anyone would have the patience to create something like it today by hand.

The Colosseum was next on the list, but it was quite a walk to that hallowed ground. I ended up near the Piazza Venezia and another huge building that housed the Museo Centrale del Risorgimento and Museo Sacrario delle Bandiere and Altare della Patria. I was pretty tired at this point, but it’s worth noting that the altar has pure gold on it, and is guarded while the museums are open.

When traffic is heavy, the streets in front of these museums are completely packed. Roman drivers don’t bother with lanes or use the lines on the roads. If the car fits into a gap, they move right in! Beware to the unwary pedestrian! After the Museums and the altar, I finally got moving to the Colosseum. The Colosseum is in incredible shape considering how old it is. I expected to be impressed by it, but I think one of the things that it’s missing is that it’s the only historical site that I visited that really isn’t used for anything other than tourism anymore. Practically everything else has a purpose, and I think that was a little sad for me. That being said, it was still incredible to imagine how gladiators and prisoners must have waited beneath the arena, and how truly massive this place is!

The Colosseum was the last stop for the day! After walking around for twelve hours, I quickly showered, grabbed some dinner and passed out!

On Sunday, I had to fly out in the early afternoon, but in the morning…I took a stroll down to Piazza di San Giovanni in Laterano. This place was absolutely amazing! Definitely the most beautiful cathedral that I saw while in Rome, though I visited a number of them. The sculptures and wall carvings were stunning, down to the nativity scene that was set up in an alcove. It was a fitting end to the short trip to Rome.

Once I finished seeing this magnificent cathedral, it was back to the airport for the short trip back to England for another week of work!

Here’s the view from the plane on the way home!

In summary, even though I spent less than 48 hours in Rome, I felt like I managed to see at least some of the highlights of the city. What’s more, I found the people to be friendly and charming, the sights to be incredible, and the food to be very, very good. I highly recommend setting up near the center of the city and just walking everywhere as driving the streets will cause you to miss so much of the culture of the city. I could easily have spent a month in Rome, just absorbing the culture and being a part of this magnificent city. I will definitely return for a much longer stay in Italy, rest assured!

Here’s a quick list of the places that I did see while I was there:

Hotel Napoleon: Great Hotel near the center of Rome

Papal Cathedrals: There are so many cathedrals, you can’t possibly see them all.

Castel Sant’ Angelo: Catholic fortress and castle, once intended to be the mausoleum of Hadrian, Emperor of Rome.

St. Peter’s Square at the Vatican: The iconic square in front of the Vatican! Gorgeous!

Piazza Navona and Fountain of the Four Rivers: Great architecture in the fountain, originally one of the sites of the Stadium of Domitian.

The Pantheon: Greek for “Every God”, a temple dedicated to the Roman gods.

Altare della Patria: Altar of the Fatherland. Monument to honor the first king of unified Italy, finished in 1925. As you can see, great architecture isn’t limited to works a thousand years old!

Colosseum: The grand arena of the Roman Emperors and people! Also known as the Flavian Amphitheatre, this magnificent structure is best known as the site of the gladiatorial games in ancient Rome.