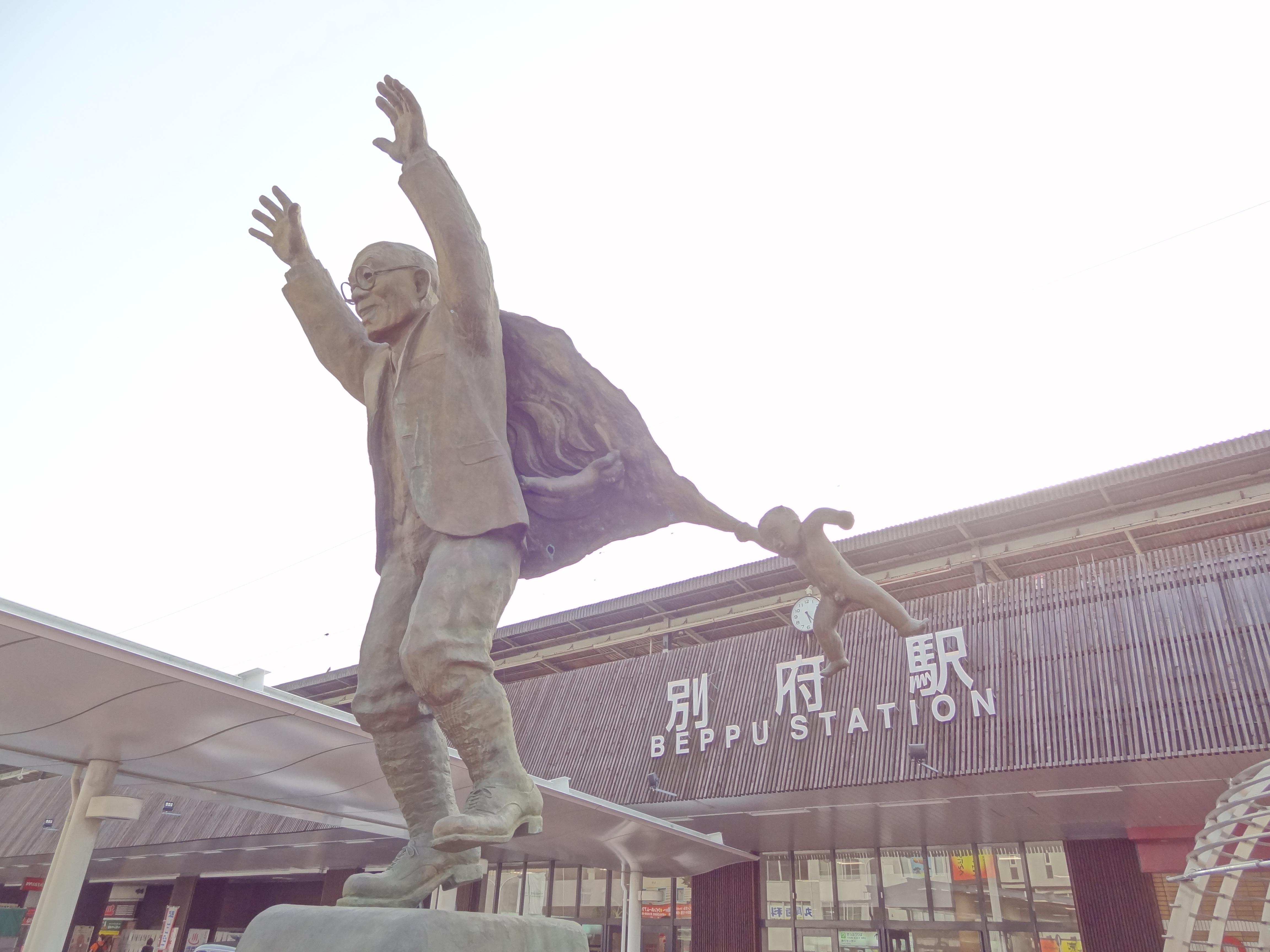 Seeing much of Hiroshima and the highlight of Miyajima Island, we were ready for a relaxing bath and Beppu was just the place to find one. Beppu is famous for having the largest concentration of onsen and rotenburo’s in Japan. The city was also our first stop on the southern most main island: Kyushu.

After waking up at about 5:30 am we moved leisurely to pack everything away and get ready for the day. By about 7:30 am we were headed back to the ferry, Hiroshima (link to read about our experience) and on to Beppu, located on the southern most island, named Kyushu, and known for its many onsen. We had been planning on using an onsen more than once, but hadn’t had much opportunity as of yet, so we decided to make an opportunity by going to the location in Japan with the highest concentration of hot springs.

Arriving in Beppu wechecked in with information for maps, where the supermarket, Internet cafes, and recommended onsen were. We had just ate lunch on the train so we decided to go to the onsen first. It was very hot and humid, but I guess that’s what you get when visiting during a heat wave; it was a great relief to get on the bus and have AC. Off to Kannawa bus station from central Beppu, so that we could walk the rest of the way to Hyoutan Onsen. The 740 yen per person included 7 different onsens, one being a rotenburo (open-air bath) and a steam room. We also rented towels for 100 yen each and got a rental yukata and paper/disposable undies for a sand bath for 340 yen. We liked the rotenburo because of the cool air and the waterfall bath for the messaging of tense muscles. We had a lot of tense muscles from our 2 weeks so far of trekking around Japan, equating to spending most of our time sitting or standing under the waterfall style onsen. It was also very freeing to be completely naked among other females and relax/bathe. I believe that we both really enjoyed the experience. We went to try the sand bath but it was way too hot for us, so we went back out and rested with an ice cream. Of course we had ice cream…isn’t that what Japan is famous for? hahah. Mom tried a tangerine one and I had apple with yogurt. Delicious! Then we were back in the spas to relax a little more, wash up, and continue on with our day.

Back on the bus to head back to Beppu station to walk towards the ocean and our internet cafe, Wakura. We spent about 3 hours there trying to send an email to family with photos, backup pics, and charge things. It was pretty comfortable, plus a shower (which we didn’t use), toilets, and unlimited free drinks (we had about 8-12 drinks/slushees). You could even order in food if you wanted. It was really nice but could get pricey fairly quickly, for the two of us it ended up costing 1,980 per or about 40$ total. Giving up on backing up any photos as it was taking way too long and not being able to send any e-mails with a decent amount of photos; we sufficed with charged photos, cameras, and re-hydration. Then headed to Beppu park (33°16’52.1″N 131°29’33.3″E) to set up hammocks and sleep. We knew we would need to get up fairly early as it was a main city park, so I convinced mom that we shouldn’t set up the Nube to make things faster. We ended up getting harassed by mosquitoes and the trees kept pelting us with leaves and debris, so we are both tired, and greatly regretting not using the amazing Nube shelter.