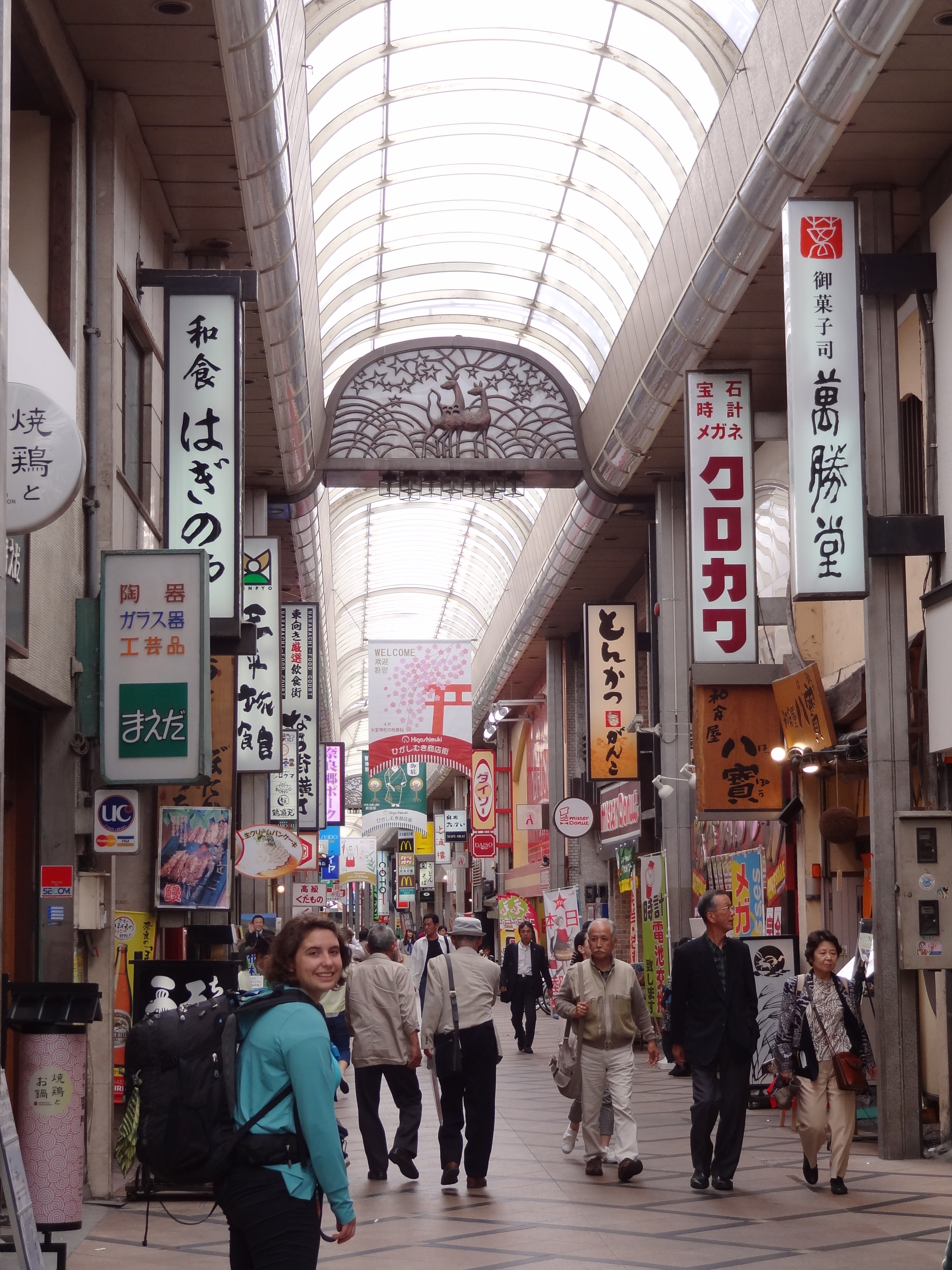 Kyoto was an amazing experience, but it was time to move on. Nara was close by and was famous for their native deer. On to Nara we rode! Plus, who doesn’t want to pay 300 yen (about 3 USD) to feed native deer? After Nara, we headed to a great Castle and “campground” in Himeji.

First day of the second week! and we are walking through a beautiful bamboo grove 🙂 I was able to climb up a hill and hug one/shake leaves down…but we are HUNGRY.

Found a street food vendor that had just opened up for the day. I got a really tasty meat mushroom bun and mom got a rice, meat onigiri wrapped in bamboo leaves. Sitting here munching on food and trying to decide where we want to go next. I mentioned a castle was close by and mom just had to go! hehe. We just made it to the train station in time for rush hour, oh how interesting it is to be crammed into a compartment with 100+ Japanese and not even be able to see your FEET. It was interesting and Strand to trust that wen we were jerked one way or the other there was no where to go. We arrived in Nara super-dooper HUNGRY… Ashlynn chose 2 fried meatball things, one bento, & eclairs. I choose what I thought was 5 fried fish patties (not sure what it was) but I ate all 5! and also chose a lemon log roll. We ate it all except the Eclairs which we ate latter. Ashlynn then made phone call to Capital One and got Money $$$ out! Yeah!

With our tummy’s full we walked to the 5 story Pagoda where there was the “Nara Deer”. We purchased deer crackers to feed them, this first group of deer all had newly grown antlers. And as Ashlynn kept the food away (up) from them they would wave there antlers up and down lightly touching her…to say “give me” more food. She was grinning ear to ear with soft little giggles intermittently…others enjoyed watching her also. We then purchased one more bundle and walked on further into town and found a group of females and babies which I then fed…but as three closed in and the younger on his hind feet, and a mother one nibbling (biting) my leg twice I quickly fed the last of my food and was done.

Finished with the highlight of NARA we went onto Himeji and Mom’s Castle. We were pooped by the time we made it to Himeji, found a good spot to set up camp, boil water for our noodles and passed out a the base of Himeji Castle in Senhime Peony Garden (34°50’14.2″N 134°41’28.4″E). We fell asleep to the sound of monkeys and zebras, since there is a zoo on the other side of the grounds.