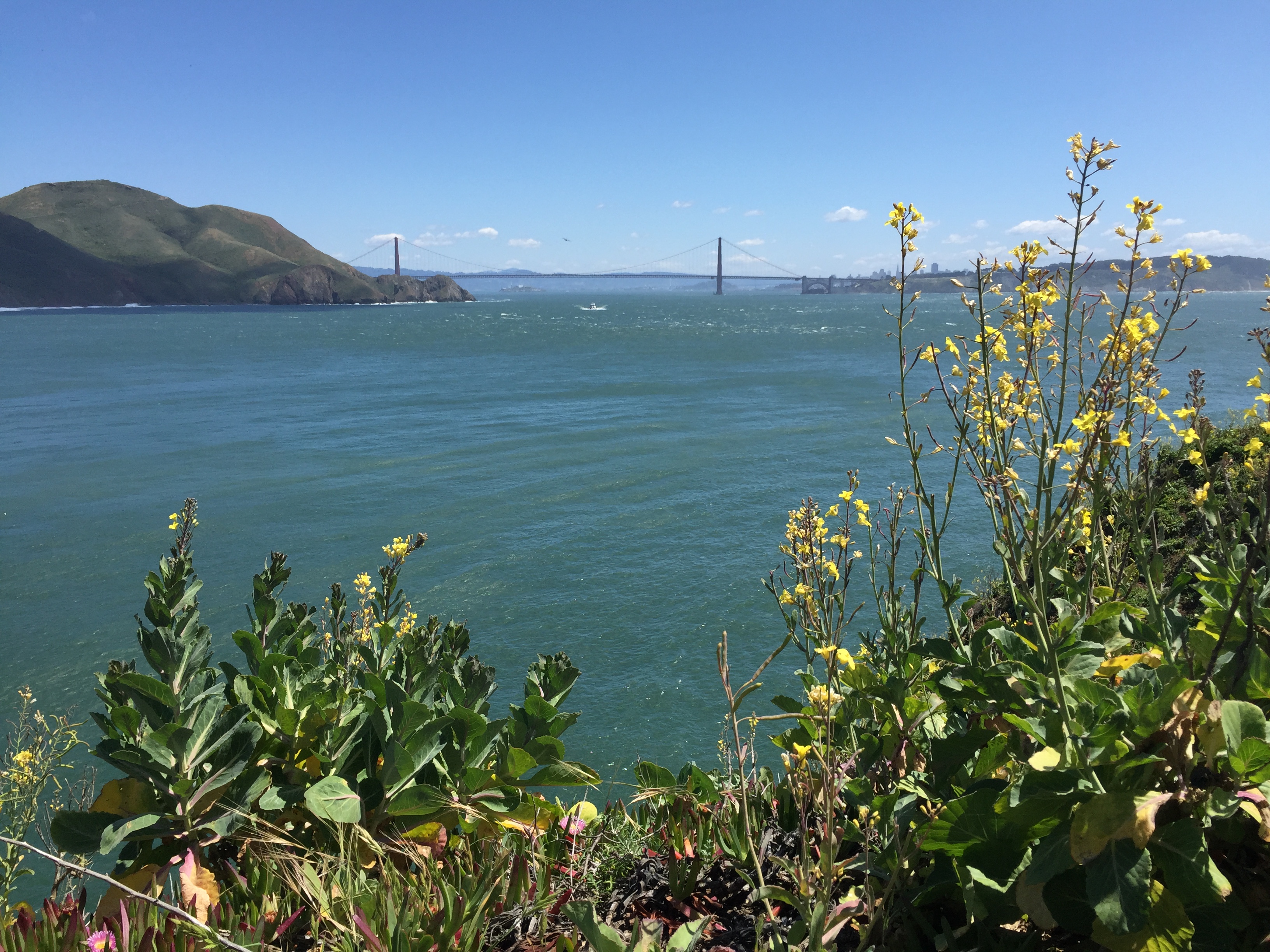 We had already booked tickets to visit and tour Alcatraz Prison Island on Monday around 3:50 pm, so no matter what, we had to make it to San Francisco by then. Taking it a little bit slower due to my severe migraine the night before (link to previous post) we were on our way from Point Reyes to San Francisco, with a couple stops in between. Our main, required stop was Alcatraz Island, but we also wanted to stop in Golden Gate Park and see the Sea Lions of Pier 39.

One of the most curvy sections of Hwy 1 still awaited us and I don’t think I would have made it if I hadn’t of been driving. It was a little sad realizing two hours later that we had reached Golden Gate Park. Josh had really wanted to hammock camp in the campground located in the park; I had nixed the idea when I started feeling so horrible. At least we now have an action plan if we ever decide to drive Hwy 1 down to San Francisco again, I get to be behind the wheel, and then we might be able to stay in the park.

With scenic overlooks and breathtaking views of the Golden Gate Bridge we were very satisfied with the little jaunt off of Hwy 101 right before the bridge into the park. Josh even visited the Point Bonita Lighthouse, which is through a tunnel and over a bridge (to grandmothers house we go…not). There are plenty of bikers and fellow visitors, so try to tour the park during an off time, such as during the week between 8 and 5. Otherwise you might be waiting a while to get a parking spot to venture out onto a few of the lookouts. All visitation to the park is free, but camping and other programs have a fee attached to sustain the programs.

Crossing the bridge that the city has become famous for, we traveled downtown and found a public parking garage near Pier 39. A lot of the food laid out in booths and advertised on awnings wasn’t looking all that appetizing, even though the seafood is some of the freshest you can find in a tourist district. We did find an Applebee’s, not the most adventurous spot to grab a bite, but I was playing it safe for the day. All fueled up and ready to go, we went searching for those Sea Lion’s that Josh had never seen in the wild. I was a little flabbergasted by that fact, as they can be very easy to locate on nearly any pier along the California coast. The big fella’s were where they usually are, on the West side of Pier 39 at the very end. Stadium style benches have even been erected to facilitate more people viewing the mammals. Boisterous in the sun bathing, they were talking to each other, flopping around, and sometimes posing for pictures; they didn’t seem to mind all the attention. Making our way through one of the doors to the center of the pier we proceeded back along the length to the entrance, gawking at some of the wares, like “Lefty’s” (since I’m left handed) and sterling charms. Nearing 3:10 we hastily made our way to Pier 33, where the Alcatraz tours depart from.

Alcatraz has a surreal feel to the island that hits you as soon as you get off the ferry. You expect to find out that the island has a violent history. Each of the buildings, poorly constructed by inmates, does indeed have a history…but most of that history doesn’t involve violence. In fact, the guards and their families lived on the island while it was a prison! The first buildings you see are the original military barracks that were converted into apartments for the families of the prison guards. As you walk through each of the buildings, guided by the free audio tour, you really get a sense of the hopelessness and helplessness that the inmates must have felt while being incarcerated there. You also understand why it was such an effective prison, at least from a punishment standpoint. No walls to speak of, but the water is an imposing barrier all its own. The buildings were bleak on the inside. It’s easy to understand why being outside and having a garden were the two most popular activities. Now that the prison is gone, the natural plants are growing again and the island has definitely reverted back to being a beautiful haven for sea birds, as the name suggests.

After spending the afternoon and evening on Alcatraz, we got into our trusty steed and drove down to Redwood City to check into our hotel for Josh’s conference. The hotel does its best to mimic a European style hotel or even a hostel. The room was quite comfortable with a bathroom, granite counter tops and shower, and a comfy bed to sleep in for a few nights while Josh was doing work things.