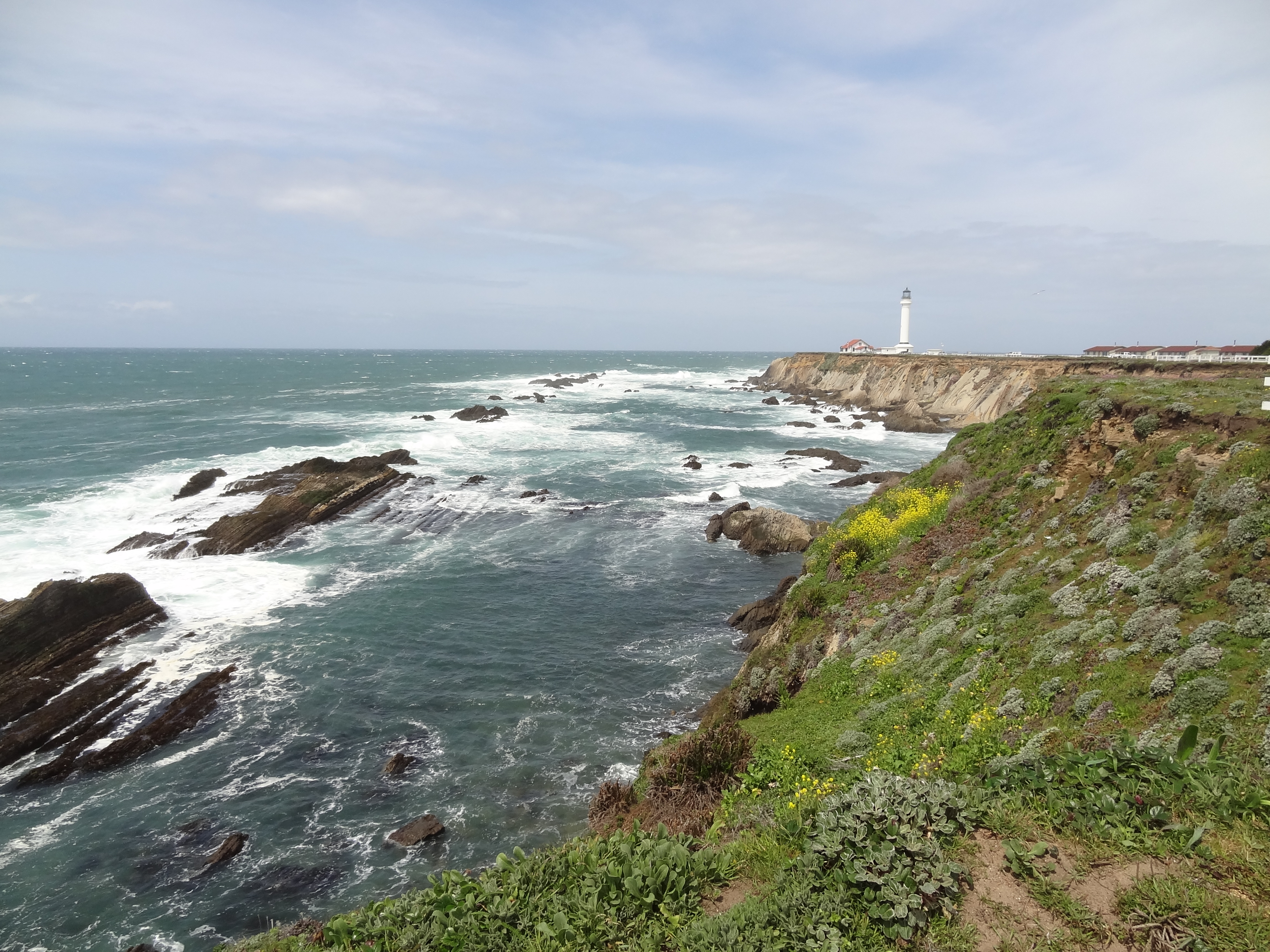 I always dread leaving home, to travel near or far, and becoming sick. This time, sickness didn’t hit like a freight train, but gradually, like a slow creeping caterpillar. Sickness had struck Hwy 1 and it wasn’t playing nice.

Josh and I had started the day by packing up our hotel in Fort Bragg (read the previous day’s adventure)  and cruising over to Starbucks off Hwy 1 for breakfast. Drinking our coffee and munching on a cheese danish and breakfast sandwich we were excited to discover what other amazing sites we would enjoy along the highway. There were multiple outcroppings of plateaus above the ocean waves. Strolling out onto one of those craggy cliff and grass knoll peninsulas was the first goal of the day.

Shortly after leaving Fort Bragg we were off of US Hwy 101 and on to the very windy California Hwy 1. The road initially called by many names and numbers was renumbered in 1939 and officially called SR (state route) 1. Building of the route took decades, included prison workers, New Deal money during the Great Depression, and many booster fund raisers. To this day, construction seems almost constant due to landslides and soil erosion. In hind sight it might not of been the smartest idea for me to ride in the passenger seat on one of the most curvy roads in the world, especially since I become motion sink quiet easily.

It was still early in the day, around noon or 1 in the afternoon and my migraine slightly inflamed by motion sickness was starting to cement itself, but that wasn’t going to prevent me from enjoying one of those fabled peninsulas. Walking out onto the edge of the peninsula, where the wind blustered against us and acted as though it was going to pluck us off the land and drop us in the ocean, we noticed such plants as the succulents sold at Lowe’s and Home Depot. The view and experience was worth the little trek from the car, about a half mile round trip and mainly on level ground.

As we bobbed and weaved with road, speeding up and slowing down in order to bank around every corner which were every few hundred feet. My migraine was rearing its ugly head and needed some sleep/rest in order to help reduce some of the effects. Sadly, our ebbing and flowing through every corner made me excessively motion sick, not to the point of up-chucking, but close. Asking Josh to pull over so I could hopefully breathe a little normally. Sitting in the car and watching the boats jump and surge in the bay off Hwy 1 was not as helpful as I had hoped. Submitting to try and drive a little farther, Josh got back on the highway. Making it about another 5 miles, I asked if he could pull over again. This time in a little park off of Hwy 1, meanly (but also understandably) the park had been designated a “no camping” location. As it was nearing 4:30 pm, I knew I needed to get my stuff together or settle down for the night, acknowledging as well my bodies need to heal itself. Only resting for 30 minutes in the car, Josh played on his phone, and I tried to recover.

Driving on, we made it an additional 5 or 10 miles, I had to stop once again. This time, getting out and sitting on the ground by the car. I was done for the day and it was only 5 or 6 in the evening. Luckily, right around the corner we had turned, there was an inn and I had seen the life saving sign “vacancy”. Getting up from the ground, wrapped in my jacket and Josh’s windbreaker, I walked along the Hwy 1, back around the corner and into the Inn’s courtyard. We had snagged the last room, which was conveniently located on the bottom floor with a separate entrance and a massive shower with two individual shower heads. I was in love with bathroom, a good thing, since I was about to spend half the night under the rhythmic and massaging water.

At one point, I was in so much pain that I was ready to check into a hospital or see a doctor or chop off my throbbing head. Luckily or not so luckily, I was out of any options other than powering through. It was serendipity that we found such a fabulous Inn, with a vacancy, and amazing services like endless hot water. I felt a little guilty knowing that California was in a drought, but I was desperate. After the one night and moving a little slower the next day, I was 90% recovered, just a minor hiccup in our travel plans. Continue reading→