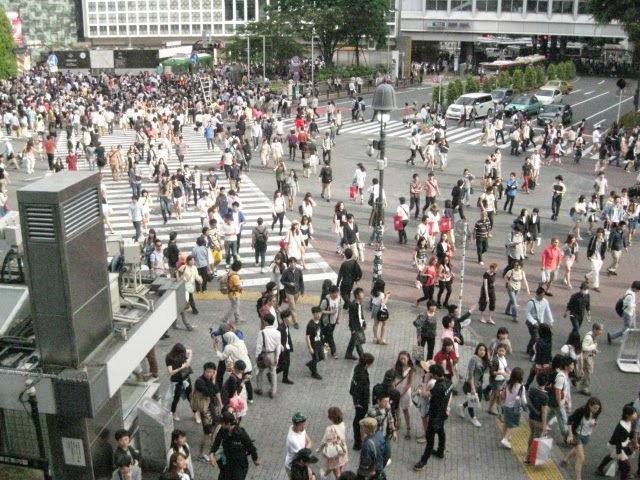 We hit the ground running and tried to accomplish all/most of what we initially wanted to see to Tokyo, but quickly became overwhelmed and needed a little breather.

Day by Day account of the locations we were at:

It is unbelievable how much we accomplished in the first week. Traveling from Seattle, WA to Tokyo was strange enough all by itself, but then to make it all the way to Kyoto in the same week, going from one great experience to another, and another, I just can’t find the words to adequately express how much I loved and learned about Japan from the first day I arrived, through the first week, and then the 6 weeks to follow. We took the time to explore Tokyo for two and half days to head off and get a better bearing on where we were and how to travel in this amazing world on the other side of the Pacific. We definitely wanted to hit the highlights of Japan before expanding our exploration.

Our first destination was Ueno Zoo and the giant pandas. We ate some super delicious, freshly made pot stickers in the park before purchasing a vending machine zoo pass. Surrounded by school tour groups, families, and others we proceeded to through the gate and saw everything from Giant Pandas, Elephants, and Rhinos, to California Sea Lions and Otters. It was somewhat funny to have California Sea Lions as an exhibit, but I guess they would not be able to see them in the wild. Ueno Zoo was a nice place to start our visit to Japan by seeing the Giant Pandas.

It was getting late and we needed to locate a place to hang for the night, were planning to sleep in a park somewhere in Tokyo as the Ryokan we were staying at had checked for other hotels and campgrounds that may have vacancies and there were none. The biggest park in Tokyo, minus Ueno Zoo, is the park surrounding of the Imperial Palace, so that is where we chose to have our first urban camping experience. After exploring the Western Garden we nervously went tramping through layers of loud crunchy leaves in the dark all sneaky like to set up our Nubé and hammocks. Later that evening, we realized that there were many people sleeping in the same park, but right under the streetlights, so much for us trying to be sneaky, hiding in the bushes.

Read more about our second day in the heart of Japan: Ueno: here

During the third full day in Japan we tried to visit the Tskiji Fish Market – sadly it is closed on Sundays and we would have to visit it another time when we came back to Tokyo at the end of our stay – Daiba, Shibuya, and finally Yokohama. Since, Tskiji was closed and it was about 4:30 in the morning we decided to take some time and travel by train to an area that might be a little out of our way compared to how central a lot of attractions are in Tokyo, off to Daiba and the Gundam we went. Still nothing was open just yet, so we found some yummy vending machines and created a whole bunch of funny photos along the waterfront of this partially man-made island. Once things were open, we hit the stores, first for food and then to see what the different shops offered. This way we would have ideas on what souvenirs to get on our way back. We heard that Sundays were the best time to see the crazy outfits of the Harajuku teens, so we headed off that way and saw the famous Shibuya crosswalk. We soon became overwhelmed by all the people, navigation, and oh my all the things we had left to learn about our new life for the next seven weeks. Val and I decided that this was a good time to head out of the major city and get some breathing room. We headed to a smaller town that was a little ways out of Tokyo, Yokohama; we found a fantastic little park that was right on the river that had little piers side by side jetting over the water that would be perfect for hanging our hammocks from the railings. This was our second day of urban camping and we loved this amazing location. In the open, yes, but the locals were kind; there was a bathroom close by for clean water to cook and for late night nature calls. Overall, Yokohama was one of our favorite places to urban camp. Laying side by side on a small pier as dusk fell over Japan, we lay watching each high-rise light with different shades until they were all lit and their reflections found their way across the water right to our hammocks was a remarkable sight. We both thought, well, if this is urban camping, we were in love!

Read more about our adventure to Odaiba and more for our third day: here

The Hakone region took two whole days to explore as we went up a mountain by almost every form of land transportation: train, bus, tram, and gondola. On this mountain, they also have an open-air art museum; where they have a Picasso exhibit of some of his less well-known pieces. This art museum also had a footbath that used natural hot water pouring from the mountain. At the very top of the mountain the Gondola stops and we elected to hike further up a mountainside to where natural hot spring pools sprouted from the earth, here they would dunk eggs into the hot pools where they would turn black and boil then be sold as good luck eggs.

Read more about our Hakone Expedition and day four: here

On the second day, we proceeded across Lake Ashi on a large boat styled like it was afloat during the days of pirates and such; we then caught a bus to a nearby JR station.

From Hakone we continued on to Kyoto, hoping to catch a performance by the Pontocho Geishas and maybe a tea ceremony. That night we were happy to get tickets to both events. We wandered around the Geisha district of Kyoto as we waited for the event times to grow closer and found a nice park that had many shrines and areas that would work perfectly for our next home. At the tea ceremony we learned here that matcha (green tea) is an acquired taste that we have not acquired, this was a once in a lifetime experience and we drank the thick green concoction despite our bodies telling us not to, for politeness sake. Giving thanks that they would only give us one serving, they then ushered us to the Geisha performance.

To celebrate the end of our first week in Japan, we visited a famous shrine and famous temple in Kyoto. The first was Kiyomizu-dera Temple with a fantastic view of Kyoto from the observation deck and the second was Fushimi Inari Shrine with the famous torii gates all lined up. They were fantastic places to visit and at Inari Shrine we even strapped our backpacks to a lamp pole so that we didn’t have to carry them all the way up the mountain side that the shrine was located at. You could tell that some people were worried about someone coming to claim the bags and were very relieved when we came back. It was so sweet to see people really care and about somebody else’s items. Do not get me wrong we were a little worried about leaving our stuff there unattended, but were happy to find that people in Japan were a lot more carrying about other’s possessions.

Kyoto continued; Fields of Torii’s and Groves of Bamboo: here

Our first week in Japan had some amazing experiences. We met plenty of great people that helped us find an attraction or 7-eleven, the correct train platform, and one nice man even drove us in his personal car to two hotels before finding one that was open with a vacancy. We rode a Shinkansen for the first time. The highlights of these first seven days were endless, breathtaking, and a complete dream, even now – looking back through the photos.