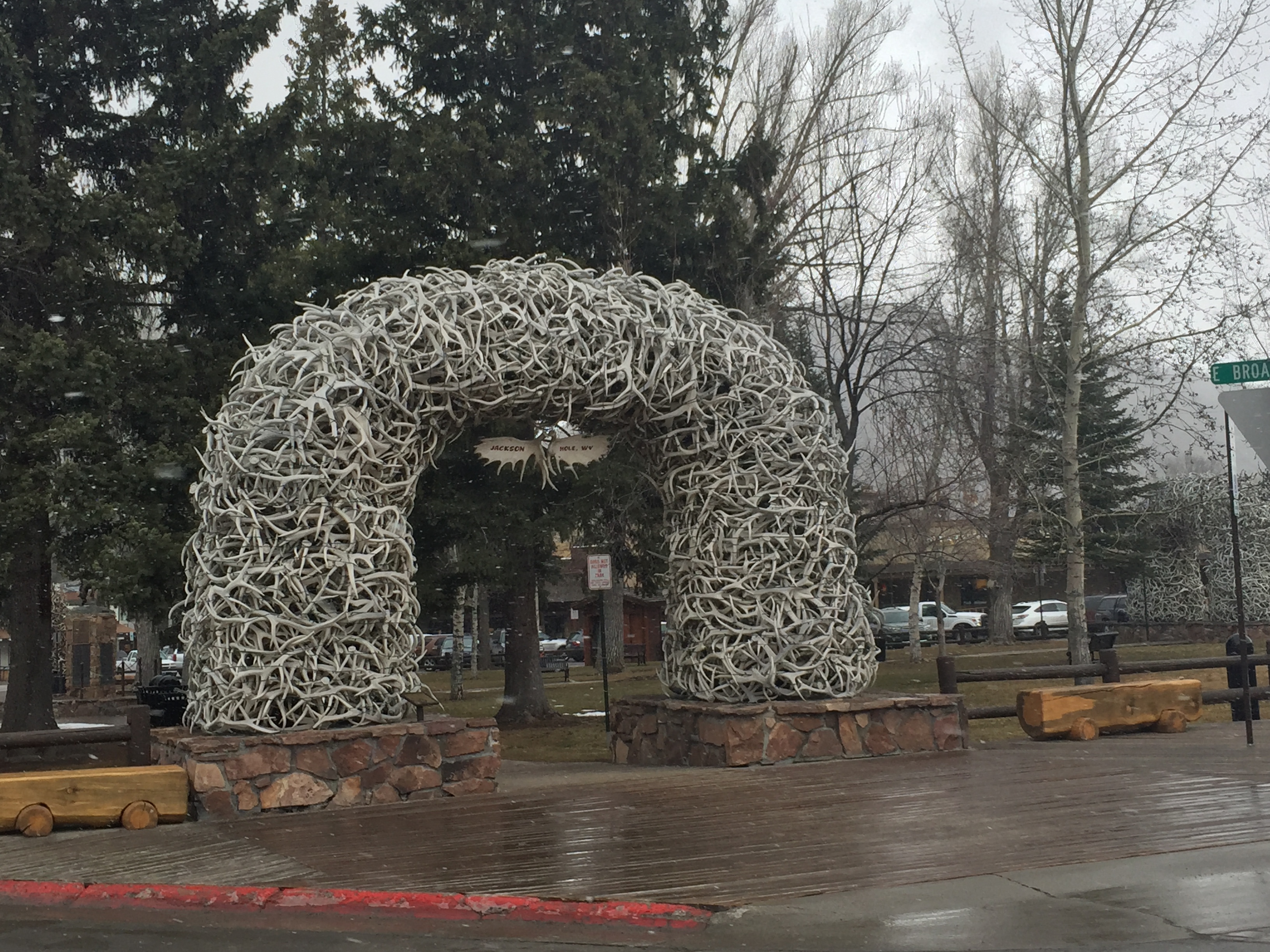 Jackson, Wyoming or “Jackson Hole” is best known for its multiple ski/snowboard resorts. It is how I got to know the city in my youth; I was a downhill racer and frequented all 3 of the resorts for competitions. This is not why we had gone back though. Josh and I (Ash) are not skiers (I’m not into it as much and he’s never been), but traveling to Idaho wouldn’t of been as complete if we hadn’t of visited. Plus the easiest way to Jackson is through Idaho, so half the battle had already been won as we were in Idaho Falls (gateway to Yellowstone National Park).

Jackson mainly thrives on tourists, with the resorts, National Elk Refuge, and many artists, and outdoors-y things to do. We stayed at the Jackson Hole Lodge in downtown. They had a great hot tub that was open from 8am to 9pm, was located only 2-4 city blocks from everything downtown, and had a gas station right across the street. The only draw back was the small bathroom. I’m only 5’4″ and I had to squat to wash my hair and basically had to squish into a corner to open the door and get out of the bathroom, but it was cheap-ish and well located.

We had gotten a late start on the drive from Idaho Falls, so we didn’t get into Jackson until 6pm or so Mountain time and were starving….time to look for decent food. We ended up eating authentic Western food, hahaha, not; we walked to the only Indian restaurant in Jackson: The Indian. They had amazing food! It was a little pricey: getting the Bison Dumplings (Appetizer), Tikka Masal Chicken (2/3 crown spice, which was Very Spicy and I love spice, but man was my nose running), Josh got the Murg Makhani Chicken (3/3 spice), and a full side of Garlic Naan bread for about 70 USD. Oh, and we each got an alcoholic drink; I would especially recommend the Vodka Bombay Buck. For a Jackson downtown dinner the food was greatly portioned (leaving us some extras to take home), well priced, and had amazing presentation….aka I would absolutely go back here and tell all my friends to go too.

Leaving the restaurant with a full belly, a take home bag in our hand, and the snow falling around us, it seemed like a dream. The snow flakes were big, fluffy flakes that drifted slowly. It was perfect weather for the nice outdoor hot-tub.

The next morning we woke to an adventure out to the National Elk Refuge wagon ride. Our ride lasted an hour, taking us close to 2-3 groups of Elk, and driven by a well informed guide, costing only 21 USD per adult. We bought the tickets at the Visitor Center located on the main road from Jackson towards Yellowstone; the Visitor Center is also the location where the bus picks you up and drives you to the entrance. Our guide mentioned that the annual goal is to have 5,000 elk, but during our visit they had counted approximately 7,000, with about 200 buffalo, and at least one pack of wolves. Due to the over population on the refuge the U.S. government had instituted hunting on the refuge earlier in the season to prevent the wildlife from coming down earlier than October or November and was also providing about 50-70% of the food necessary to the elk from January to about April when the refuge was expected to provide winter feed for survival. Funding for the refuge and other such programs are provided by the antlers that the elk naturally shed annually; it was mentioned that antlers can go for around 1,000 USD and hides from elk that die of natural causes (aka old age) can go for even more; raising around 30,000 USD annually.

Before heading back over the Rocky Mountains to Idaho Falls, Idaho, we wanted to pick up some breakfast/lunch. Just south of St. John’s Episcopal Church, off the beaten pathway, sat Teton Thai Plate; a small, 6-7 table restaurant, that served some decent Thai cuisine. We order Cashew Nut chicken, pad thai, 1 Thai Iced Tea, and a Steamed Dumpling appetizer. The food was filling and delicious, but the best part of the meal were the dumplings!