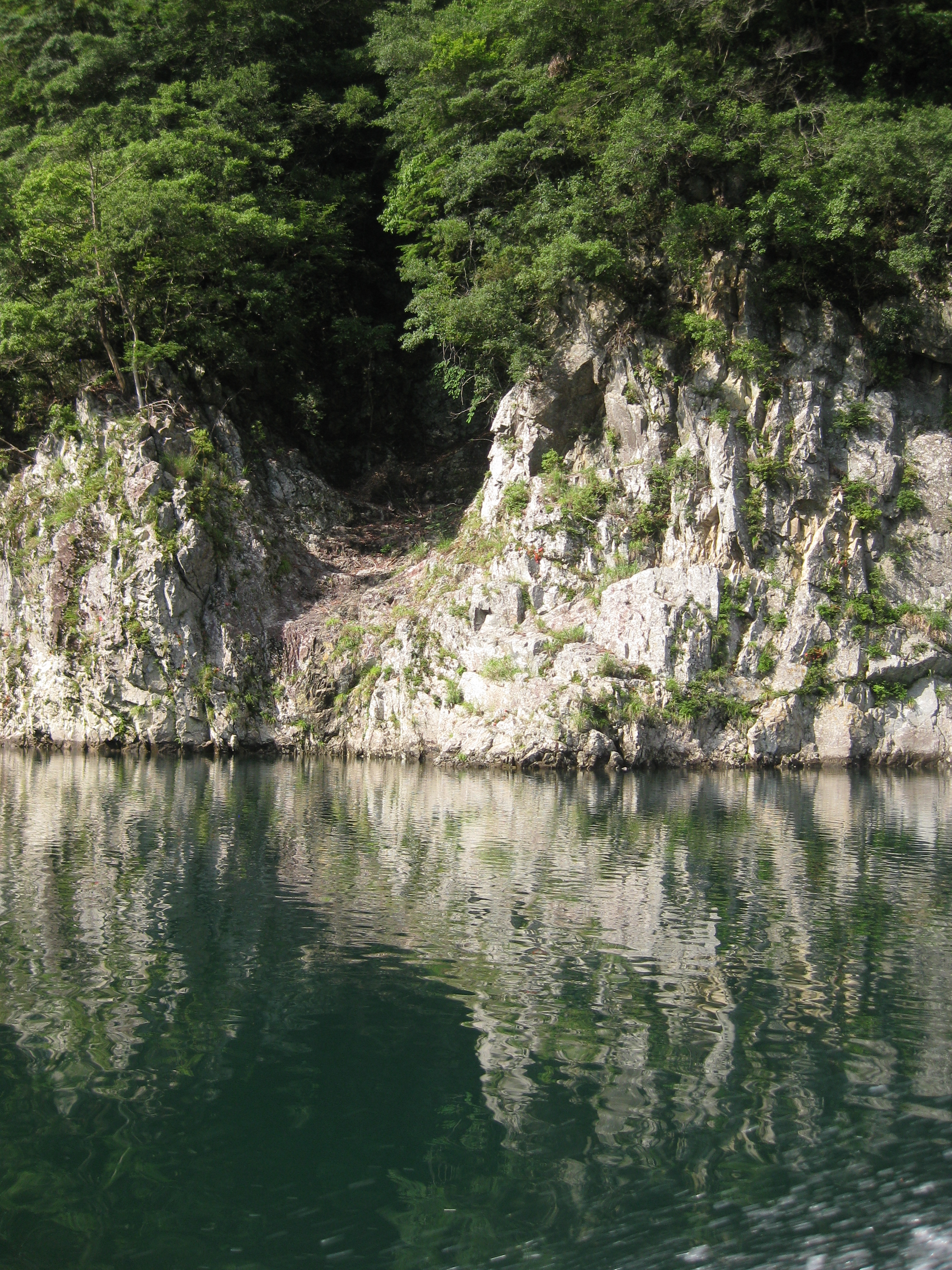 We were a little over the National Geographic recommended pilgrimage by the second day. Why? oh Why? had we thought another hike was worth it? The pretty views and breaths of fresh air were all well and good, but we were ready for trains and buses as our knees started to detest the hills. We don’t know what they fed the wildlife, but they are huge!

We awoke around 6 am and we were both feeling our knee’s. Ash’s rigging for her pack broke a bit more…but this time it helped 🙂 Now she could clip her belt with a carabiner and cinch the belt tight and get the weight of her pack off her shoulders! Yea!!!

What’s up with these hills?

Today’s trail was a bit more of a mixed bag, going down steep trails then climbing back up again! We would stop at the little shrines, count some of the coin’s left behind and wondered if monks collect it? On the trail near one of the peaks the clouds rolled in and it was like a fine mist of powdered sugar in the air. You can tell this is a normal occurrence, as all of the trees are green, even the bark as the mist settles in and allows moss to grow all over them. It was magical, even thinking back on that moment years later. This was the reason National Geographic recommended this “stroll in the woods”.

As we walked along the Kumano Kodo Trail Ash let out a mix of yelp and scream along with some side way’s step’s in front of me…yes…she is always in front of me…she does have all the maps, money, and it works.  As she also finds the mud holes, the moving rocks, the low branches, and in this case a h.u.g.e….h.u.g.e….toad! It was the kind of big you could BBQ! Well that got her heart racing.

A bit further on the trail we saw some more crabs and toads.

Where’s the city and buses?

By this time we are not seeing anything prettier then Yakushima had to offer and I was feeling pain in my knees with every step. Flies would come and go, but the drizzle of rain did not deter them. We had come to the part of the trail where it was A-L-O-T of downhill and big–to really big deep steps. Are there leaves? How many layers? Will I slide? Switchbacks of downhill steps! Then we came to a place where we could see the Old Highway Road…and Ash said “you choose” I without hesitation said “I choose the road!” and I lead the way….as short as it was, I was in front leading us to pavement! Ash snapped a photo of me cherishing pavement! Along the side of the road is a drainage canal. Although we loved the crabs on the trail, this road was loaded with descending, shaded pathways that we saw one vehicle and a elderly couple going the opposite direction on.

Wait…! I forgot to tell you about the snake! We came across a fairly large 2 foot snake with frog legs sticking out of it’s mouth — it looked like a weird legged snake. I snapped photo’s but wish I had video because as it slithered away the legs moved side to side. It was really cool! But I am also glad it had something stuck in it’s mouth that rendered it a “non-threat” to us!

I am so very happy to be on this road! We arrived to the town of Chikatsuyu and seeing real buildings where a sight for sore eyes! We first found a bathroom that we used to clean up a bit, fix our hair and wash away some of the sweat. Then we were looking for food, we had eaten everything we had and were hungry….a local lady pointed where to go…we went where we thought she pointed, but were confused when it was a hospital and not a grocery store. Sadly, we started walking back…she came out of her shop and pointed again, plus a more forceful tone to what she was saying. So we went the other possible direction and found our way to the “supermarket”! Bought prepared food and milk!

Then we waited for the bus to Kumano Hongu Taisha where the largest torii is located…in full sun in the middle of a field. It was very hot and we were looking to cool down…Ash was saying “look for the ice cream cone” which is a plastic 3 foot cone to show you can purchase them in that shop. I was like “I see one behind that backhoe!” We found a shop much closer and purchased a strawberry cone and then sat in the shade at yet another shrine…this one having at least 100 steps to the top…neither of us where interested in climbing.

We then caught our next bus to Shiko, I sat up front opposite of the driver. It is a awesome seat! This bus took us to Shiko where Ash and I were the only customers on a jet boat that seat’s at least 50 people! It took us up the river to a narrow gorge where they had named many rock formations. The turtle one, looked like a turtle and so I took a picture of it, the duck, mushroom, and lion we could not make out…so we just shrugged our shoulders and smiled.

They did retract the roof while in the gorge which allowed for full view of the cliffs plunging into the cool blue water of the river. Near the end they set out a ramp and said “15 min”. We were confused and wanted to make sure they (captain and co-captain) didn’t leave us there! After dis-embarking we noticed people selling their wares…but as the two of us were the last boat and we didn’t walk over to the tables, they started covering it all up for the night. We took some great photos of each other and the opportunity to stretch our legs made for a quick 15 min. From the Dorokyo Gorge we caught yet another bus to Shingu, where we caught our train to Katsuura!

Okay, so now we are in Katsuura–where there are onsens on the sea! But it was late, dark, and we were very, very tired…looking for a park we walked, and walked, and then walked the entire trail following the coast, seeing all the rocks in the ocean, the entire port, and then we see a sign stating something like “coffee and rest”, it was 10 pm by this time and so we headed in! Paid 90 yen for about 4 tatami mat room, where I climbed right into the shower/tub while Ash striped down, then set out our beds and even blew up my air mattress (providing a little extra cushioning for my sore legs).

We washed our clothes, charged our electronics, and watched some Japanese TV, taking advantage of staying in a hotel. Even though we had endured one of our longest days, we still did not sleep as well on the floor as we do in the hammocks! Paying money for a less comfortable sleep is hard to do. As I got out of the shower I noticed Ash’s bare legs on all the white bedding. Boy were her legs eaten up! Should have taken pic’s….but too, too, too tired! I was done…first blister of the adventure.

What a day we had!