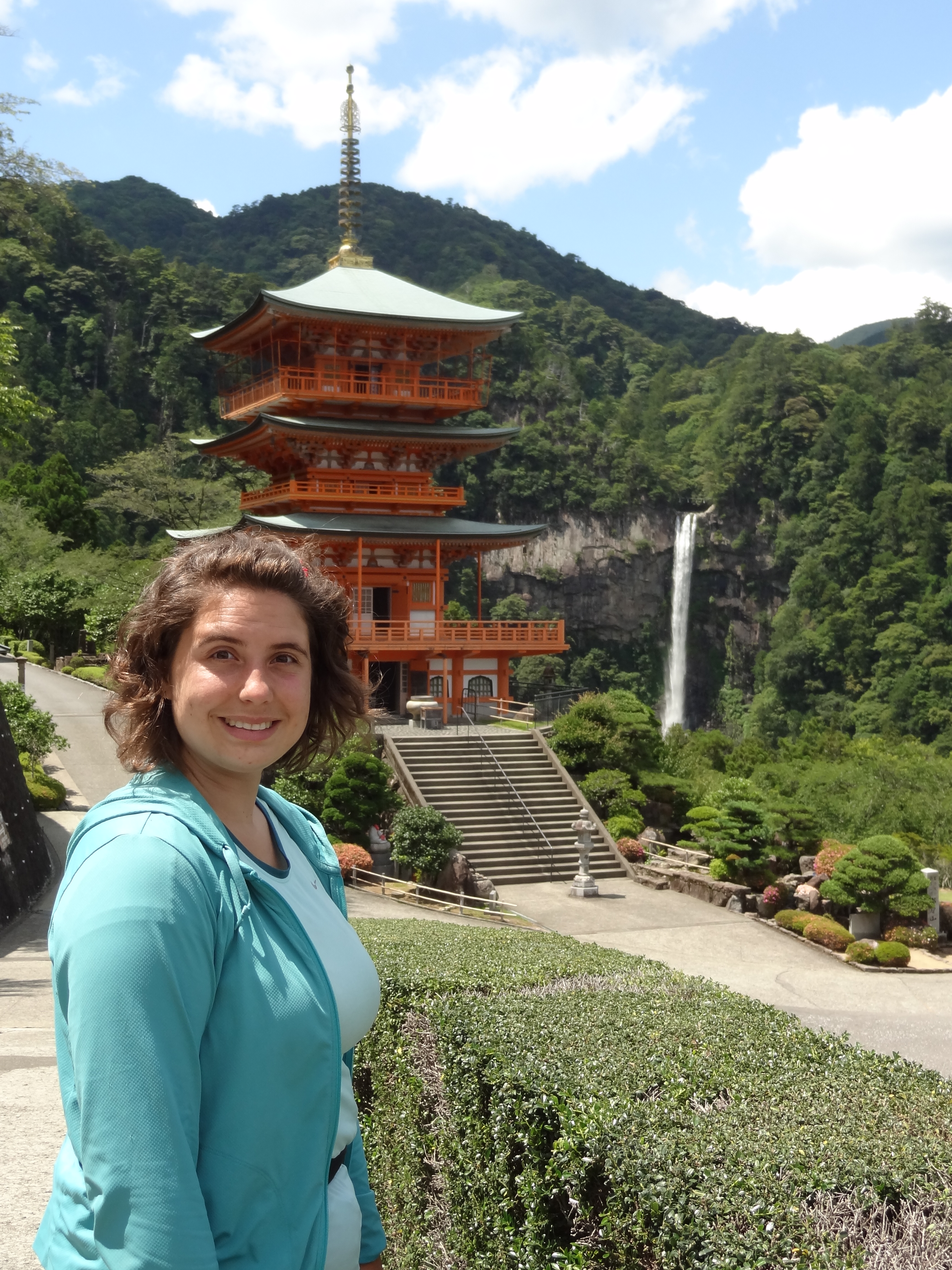 We hadn’t had a chance to visit as many shrines or temples as we had hoped during our visit thus far. At the end of our “religious pilgrimage” along the Kumano Kodo, seemed like the right time. Plus, we had seen this amazing poster of Kurano Nachi Grand Shrine with a three story pagoda and amazing waterfall. Being in the area, we weren’t going to miss this chance.

We checked out of our hotel just before 10 am, Ash purchased round trip bus fare from Katsuura station to Nachi-san for only 1,000 yen where one way was 640 yen.

Arrived in Nachi-san and where do you think? the shrine “Kurano Nachi Grand Shrine” is?? UP of course! So up the stairs we went! When I smelt incense wafting through the air I knew I must be getting close! We walked around the shrine and the garden taking a few snap shots along the way. We had come due to a poster of the waterfall and pagoda so we made our way in that direction…The garden grounds around the beautiful three story pagoda with waterfall (the largest (133 meters) in Japan) was un-believable….it looks fake, even when you stand there!

Ash found the best location to take photos and as others noticed we were asked to stand aside?!? Ask? Well you know those hand movements?!?

Then we were off for a closer look at the waterfall…where?…straight down…tumbled rock stairs, through some beautiful trees, but your more like rock hoping than walking stairs. You could pay some monks 300 yen to view the waterfall from a vista…up about another 100 steps, which we passed up.

Freedom and lack of luggage

After getting off the bus…before the stairs started to the Kurano Nachi Grand Shrine there were a couple of shops selling things in an open market type style…. Ash was up this trail way before me this time too…even though we had locked our packs up for the day at the Katsuura Train Station. So I couldn’t blame my slowness on my heavy pack. Being without the packs was very nice…Ash was yelling (well) talking normal in Japan is yelling) “freedom” as she twirled with no-pack on!!! Okay, so Ash was checking out the stores merchandise while I was still climbing up the path. She found a blue dragonfly grocery bag that was perfect for me.

After our nice day of sightseeing we returned to Katsuura (okay- writing this on the train to Niigata) and was headed for Yamaguchi and a train was leaving within a minute…I was like “let’s go!” Ash was like, “Val our packs???” Ohh yea-Bertha! Bertha is the name my pack earned when she was weighed down with carrot’s, cabbage, extra-water and such, sometimes she had a mind of her own as weight shifted and caused me to walk where she wanted to go, sometimes that direction was backwards!

Needless to say we didn’t catch the earlier Train, but we did have a home when we finally stopped in Nagoya for the night…(knowing it was a larger city and should have marked parks on their street maps). Ash led the way to a convenience store for our dinner and onto Nagoya Noh Theater Park (by 8:40 pm) where we sat and watched a guy fine tune the flight of his large helicopter. Used the bathroom and hung our home for the night.