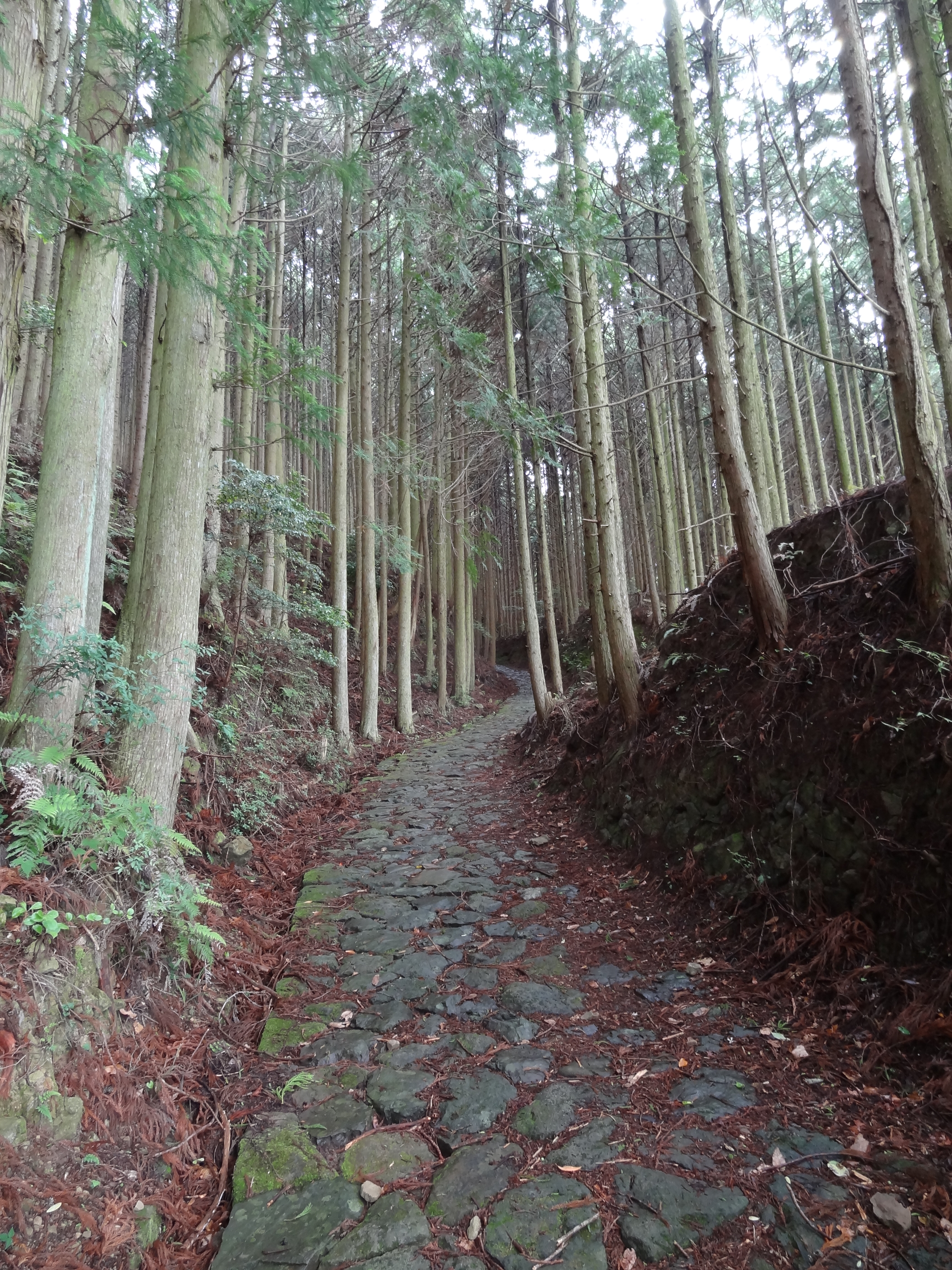 Recommended by National Geographic for tours, the Kumano Kodo Pilgrimage is a difficult but interesting trek on the Kii-Peninsula, including multitudes of wildlife. “Wildlife” including, salamanders, crabs, snakes, and toads. At 300 meters above sea level, it was interesting to finds some of these creatures.

We awoke around 8 am to move all our stuff to the info center. But, before we got the Nube and hammocks down, three construction workers had to walk (duck) under the Nube because it was hung diagonally over the trail that connected a car park (dirt lot) and the construction site. We topped off all of our water bottles and the extra bladders and made our way to the other side of the road. We each chose a drink from the vending machines for breakfast, got a stamp pic, and hit a clicker twice. (They count the number of people who use the trail) Then we were off!!

At a very slow pace…it was a well defined trail, but it was straight uphill for a very long time starting with rock stairs, becoming stairs with tree roots, ending at the top with just a dirt trail. There was nothing to hold onto, no rails, no trees and no bushes. Because of this and the big steps, the fabric on our pants began to peel from us placing our hands on top of our thighs to push ourselves up. Ashlynn’s backpack’s waist band clasp had broken first thing this morning and her new “revised”  belt was not holding, so the pack weight was all on her shoulders causing her pain and grief. So, her attitude was not terribly positive.

After one of the many climbs, we came to a shrine next to a huge old tree. We stepped in, took our packs off, and searched for something to eat out of my pack. Slim pickings rendered us with sharing some honey peanuts and a smooched Snickers bar each. As we rinsed our hands in the shrine water, I noticed a black salamander with a red belly…it was so cute! Ashlynn snapped some photos, wrote our names in the shrine book, and stamped her paper with the shrine emblem. Then, we were off again!

We emerged into a small hilltop town and we walked the steepest trail between houses, I mean it was like take 15 steps and stop, then another 15 (at this point we are on week 5 and in good shape) this is kicking our butts! As we emerge from the houses we find ourselves between rice fields, we are eye level with one as it’s so steep and I noticed poly-wogs! Then we both notice tons of frogs, salamanders and poly-wogs now we know why the cranes are always in the rice fields! Yummy, crane sushi!

Well….a slow up again. Ashlynn’s neck and shoulders were in pain, heat and bugs, and all the uphill walking was not making life easy. At some point, she pulled one of the free plastic fans out of my pack and we figured out that the bugs don’t like moving air. So, for the rest of the day, we fanned ourselves as we hiked! Looked strange? Yes! But those bugs! Flies bite!

We had finally come to a clearing and Ashlynn had had enough and wanted some real food for lunch! As she pulled out the stove to cook some noodles, I started pacing trees as I was tired too! Then, we checked out the bathrooms…what the heck? There were two, side by side, flush toilets atop a hill in the middle of nowhere. “Ok, we’re staying” was the consensus.

Oops, wait a minute…I forgot about the crabs. Yes, I said crabs! All over these hill tops. Bright coral orange crabs about 2-3 inches in diameter that moved as we approached them. Ashlynn was feeling ill at this point..and had walked past three of them without even noticing them. But she soon found that the crabs were repelled by and crawled away from the air gushing from her fan, and this was just the thing to take our minds off of the fact that we were once again, hunched over and climbing yet another mountain!