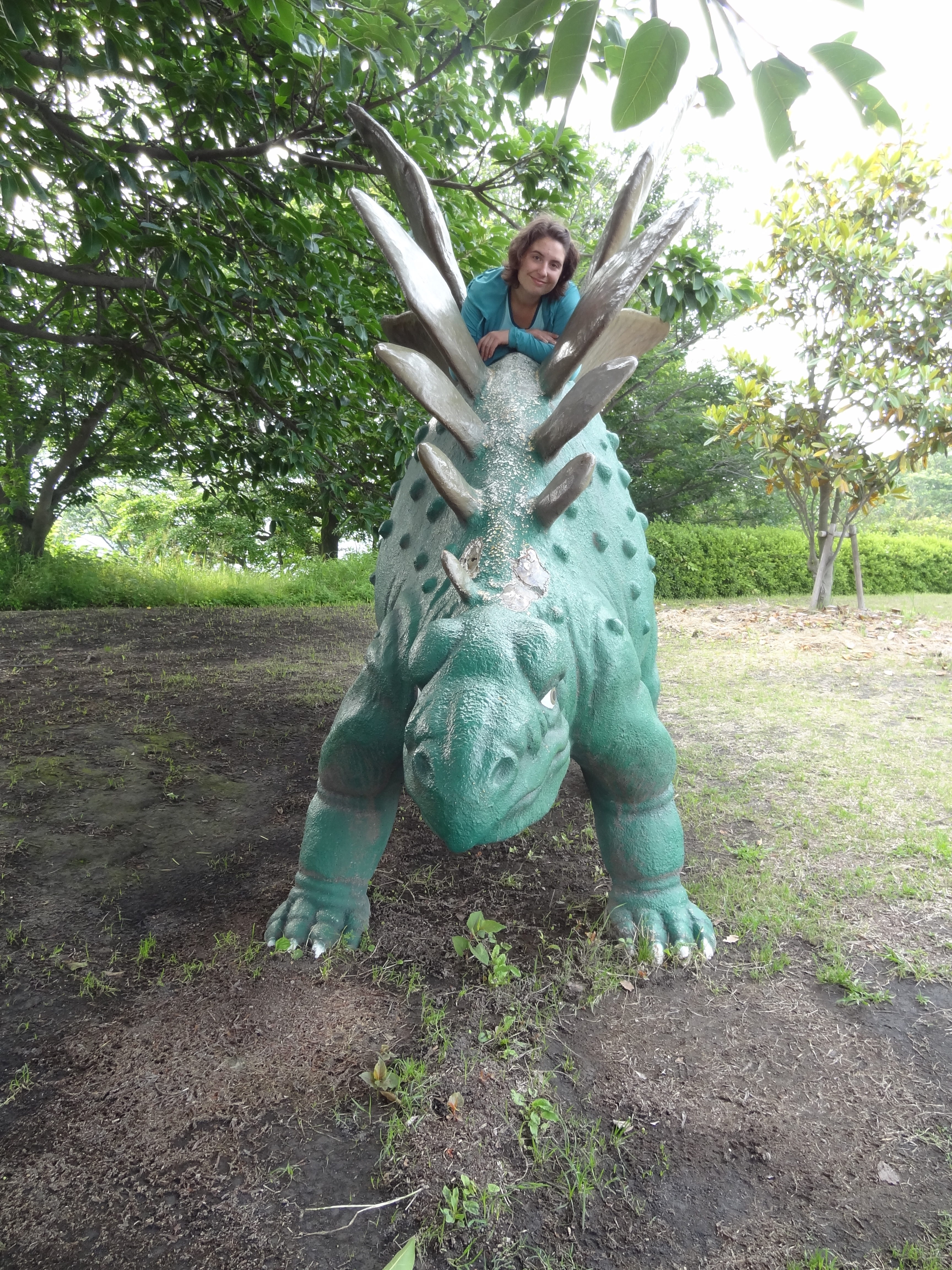 Refreshed and relaxed from Beppu (read about the previous days experience), we were off to Dinosaur park on Sakurajima Island. We rode a ferry to reach the fabled park that I wanted to urban camp at, which then came with 2 story location, pet hawk, and viewing of a Submarine that affected the ferry route we had just used.

Now we are on the train to Kagoshima via Miyazaki (pronounced “Me-za-key”) to visit the tropical island of Yakushima, containing the forest that Princess Mononoke was partly based upon.
Arriving at Kagoshima by the super express, a regional Kyushu train that travels slower than the Shinkansen but faster than the local commuter train, was really nice because we traveled by the Pacific Ocean almost the entire way. If we had taken the Shinkansen it would have been sunlight, tunnel…tunnel, sunlight for two seconds and then tunnel again. This way we felt that we saw more of Japan then we would of.

Once in the train station we could tell that it wasn’t a hub to anything. Not very many people were using the platforms and you could tell that most of the industry had moved on. The new main hub was Kagoshima-chuo, which was the next train stop. We walked up to the ticket office for some local information, since we didn’t even have a map of the city, and asked how to get to the Yakushima Ferry. They informed us “take Taxi”. We decided that we could find a map on the wall somewhere or just keep asking and eventually figure it out. Walking outside the station we happened across a very nice gentlemen that told us how to walk there and that it would only take about 20 minutes. The port was comprised of two terminals and the Sakurajima ferry dock. It also had an aquarium, free dolphin shows, boardwalk, and a little outdoor mall/park. The Yakushima ferry only travels there once a day; it leaves Kagoshima AT 8:30 am and leaves Yakushima at 1:30 pm. You can only buy tickets the day of; one way for 4,900 yen (including tax) or a round trip ticket 8,700 yen.

We decided to take the ferry to Sakurajima and stay in the dinosaur park that I had been talking about for the past two+ months. We were off to see the dinosaurs! 🙂 You only pay for the ferry on the Sakurajima side, for adults the fare is 180 yen which is VERY cheap. They have a tourist information center in the Sakurajima ferry terminal that we were able to find the dinosaur park on. Interestingly it was the hill that I had pointed out having a really awesome “Japanese” road (aka very steep and leading to a heavily forested knoll). After visiting the grocery store that was close by we began the climb. It ended up that we didn’t sleep right under or even in view of the dinosaurs because we found a very awesome observatory that had two floors. The first one we set up the Nube and kitchen (since there were table and chairs, plus a really nice BIG sink to wash clothes and dishes in) and the second story was for a spectacular view and to feed the hawk. As the sun was setting and our food was cooked ( plus mom had just finished washing clothes and had left the soap to dry by the sink) we noticed that we had found another very friendly hawk. I had thrown the chicken tendons into the bushes so that they could become nutrients for the plants. As we sat, eating, the hawk dove and grabbed some of those remnants for dinner. With the remains of our dinner we feed the hawk by placing them in three piles on the railing of the 2nd story and videoed him swooping and picking up the meat (chicken) & rice. Earlier during the meal, I saw a submarine surface right in the ferry boats path. It was amazing to see how large a vessel it actually was & to see it in motion. I had toured one in San Diego once, but to actually see it move was astonishing. The fine black sand was volcanic ash, as Sakurajima is an active volcano.